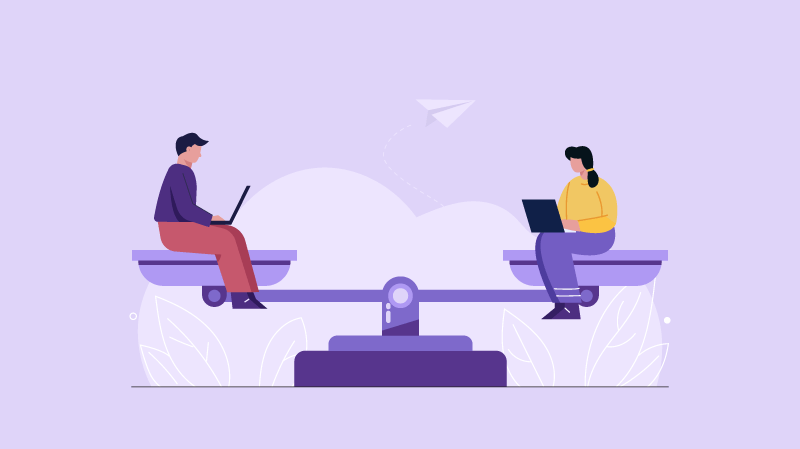 How to Implement Gender Equality in the Workplace

By: Suchitra Mishra On: October 12, 2017 In: Gender at Work, Leadership, Management, World of Work Comments: 0

In one of our previous posts, we spoke extensively about the glass ceiling, and how to shatter it. In a more recent post, we explored the importance of gender diversity at the workplace. Tackling the issue of gender discrimination at the workplace, is like addressing the elephant in the room. Uncomfortable questions need to be raised, and attempts must be made to address, and redress them. While men and women are ‘entitled’ to equal rights by law, this still remains a distant dream. A quick glance at only a few facts and statistics (source: medreps.com) will prove why:

Where do we begin? Right here.

1. Gender Equality – Understanding the principle of equity over equality

In order to address gender discrimination, we first need to acknowledge the deep-rooted history of gender inequality and discrimination world over. In doing so, we realize that women have been deliberately subjected to a backward footing, as compared to men. Hence, more than equality, they need equity. But what is the difference between equality, and equity? Here is a common yet effective anecdote that brings out the difference beautifully –

Gender equity is a prerequisite for gender equality. Men and women did not start off on equal footing. Years of subjugation and discrimination demand that in the current day, women get that little “extra” push, and support in order to bring about equality. Without a focus on equity, the hope for equality is misplaced and cannot be achieved.

2. Gender Equality – Acknowledging and challenging your own bias

An article on one of our favorite sites – UndercoverRecruiter, says it best. The best way to bring about effective and impactful change is by working on change within us. This is often the most difficult thing to do – since it requires us to come to terms with our demons, accept them and then get rid of them. It is time to look within for traces of any bias as far as gender equality is concerned, before we point fingers and expect others around us to change. Looking within, and helping ourselves change is not a form of judgment or self-condemnation. As you will read below, we are only helping ourselves get rid of what we thought was “normal”.

In order to overcome gender inequality we must address our own bias. Gender related bias that hold women back can include outright discrimination to deep-rooted unconscious attitudes. The normalisation of everyday sexism has led to an invisible gender bias that we often don’t recognise. Human beings don’t know how to be wholly unbiased; from the classroom to the boardrooms – at an early age, we are conditioned to believe that girls are this way and boys are that way. It’s about challenging these ‘natural’ thoughts by examining, questioning and having open conversations.

Basic anthropology tells us that groups tend to recruit new members who are similar to themselves. So a predominantly male field will often choose a male candidate. This is an influential factor in why women are significantly underrepresented in traditionally male-dominated areas, and senior positions. Changing our bias in recruiting is integral, and admitting our own bias is an important step to a more open, diverse and fair workplace.

This is everyone’s issue – men and women, and extends to women’s own limiting self-beliefs.

Biases are also very apparent in the highly unfair recruitment processes where it may not be rare to choose candidates for roles based on gender and not skill and ability.

It’s a common perception that women are generally better suited to support type roles, whereas men will excel in leadership positions; however it is these kinds of stereotypes that form the basis of gender discrimination at work and action must take place to prevent it happening.

The hiring and allocation of work must to be conducted on the basis of an individual’s abilities and character, regardless of whether they are male or female and the preference of customers, clients or other employees is not a legitimate and protected reason to treat employees differently according to gender. – Undercover Recruiter.

3. Gender Equality – Being Fair and Transparent about Pay

That women at work are under paid and under represented is an uncomfortable truth we need to accept and address. The first step towards doing so is by being transparent about any gender pay gaps that exist and tackling them. Equal pay for equal work is a policy that must be a principle at your workplace, and not just a policy. This, as a principle underlines fairness and puts equality into practice.

” In 1976, the Equal Remuneration Act was passed with the aim of providing equal remuneration to men and women workers and to prevent discrimination on the basis of gender in all matters relating to employment and employment opportunities. This legislation not only provides women with a right to demand equal pay, but any inequality with respect to recruitment processes, job training and promotions.” – Wikipedia

We are still battling for these basic rights, even though the law mandates for men and women to be paid equally for equal work. What does that say? We have a long, long way to go before we can make gender equality a reality.

The very first thing we spoke about, in this post was on understanding the principle of equity with reference to implementing gender equality at the workplace. One of the ways you can ensure an ‘equitable’ growth for your female employees is by understanding that mentorship plays a huge role in boosting their progress, improving their skills, and helping them build strong profiles which will help them grow and sustain in the ever competitive, ever evolving world of work.

Focus on having mentorship programs for your employees, and specific ones for your female employees. Wondering how cost-effective it would be? You can implement this with zero cost, and reap tons of benefits. One does not need to have a formal structure for mentorship programs. Building this into the culture of your organization, where your employees are encouraged to reach out and help each other is the most sustainable and effective way of going about it.

This also includes training those in managerial positions about how to tackle issues related to gender equality at work.

The most effective way to bring about change is by leading through example. By encouraging more women to take up leadership roles, you put them in a position where they are able to help and mentor other women (and men!) around them. Role modeling is a very effective method of demonstrating the change you wish to bring about. This is also a very strong antidote to the phenomenon of the glass ceiling.

The glass ceiling in India is a reality today, because of a culmination of factors – socio-cultural, legal, personal, and organizational, and cannot be attributed to any single factor. Hema Krishnan, in her interview at IIM Bangalore on Glass Ceiling in India : A Reality for Women?,  speaks about how every woman is capable of accessing the top most rungs:

Theoretically, every woman is capable of reaching the top of her organization. What sets women such as Indra Nooyi and Chanda Kochchar apart from the rest of the similarly talented women are: a high level of sustained self-confidence and emotional quotient, persistence and patience, the right mentors at various stages of their career, an extremely supportive family and a little bit of luck or opportunity.

It is due to centuries of subjugation, discrimination and domination that the struggle to make one’s talent known and respected in the professional realm, is a big deal for women in India. It wouldn’t be untrue, neither would it be a fleeting statement if we said that it is not half as difficult for the men.

In order to ensure that the world of work does not lose out on potentially great talent pool – it is necessary that a more inclusive environment which encourages gender diversity and equality is created.

One of the major barriers that prevent women from reaching to the top of their career is the lack of childcare support. Again this ranges from complete stigma to deep-seated traditions in the role of mothers. Employer’s play a vital role in supporting mothers; work together to agree on a fair and balanced workplace goal that will drive productivity, whilst allowing flexibility and remote working where possible.

Progression and promotions are considerably more difficult to achieve when you take time off, which has a disproportionate effect on women who continue to hold the lion’s share of childcare responsibility. To relieve working mothers of the domestic and childcare burden, parental leave for fathers should be promoted. Not only will this allow mothers to invest more time in their careers, but research has shown that fathers want to be more engaged and involved in child care duties. – Undercover Recruiter

Making space for work from home opportunities for women, creating launch pads for women who’ve been away from work for a while for various reasons, and not letting gender biases form a basis of recruitment (to begin with this!) are some ways you can actively contribute to implementing Gender Equality in the world of work.

Go out of your way to ensure you treat your employees equally, irrespective of their gender. Invest your trust in them, and reap a handsome Return On Investment. Recognize merit and celebrate it. Understand that, basically, it all boils down to you, to a great extent.

But why go that extra mile? Because like we said earlier, without equity, there can be no equality!